I can’t resist putting some thoughts about ‘money’ on paper again. I am not an expert in this field, but is anybody really?

Like many others, I follow the discussions about throwing money around during and after corona. And of course, the pressure to combine the billions of Euro’s now being spent, with sustainable targets is huge, and only logical, of course. The companies targetted or solutions usually proposed are often not sustainable. Electric flying is not a solution, neither is hydrogen. We try to preserve what we have by throwing a lot of technology and energy into it. Which from either side turns against us, due to the enormous amount of renewable energy that has to be generated, and thus require wind turbines or solar panels to be produced, with all the consequences on the material side, among other things. Neither is electric driving or large-scale renovation of all homes with completely new facades, roofs and installations really helping. Like if it freezes for 365 days. On the contrary, its getting warmer and cooling will become our biggest problem (which will trigger a new wave of technology…). All the same sheet and suit.

Yes. we have some small successes with somewhat lower energy intensity per invested Euro, but only thanks to an enormous production increase and new technology introductions, driving CO2 and material consumption up. 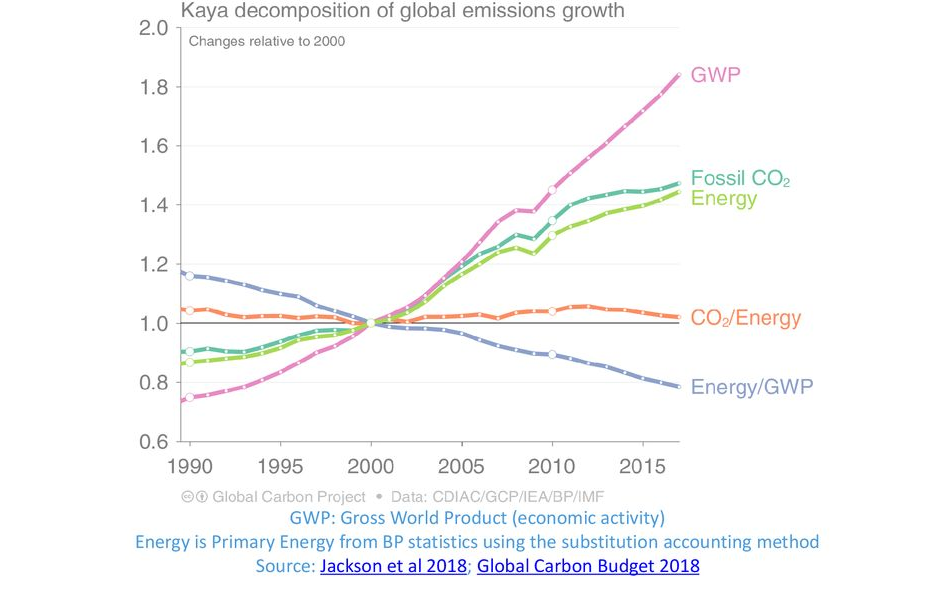 Which will continue, large-scale material extraction is expected to increase by a factor of 4 (!) [1], and will have other unexpected effects: depletion, nature destruction, attack on forests (bioenergy for the extraction of materials, for example), and thus on biodiversity, water supplies, etc. (CO2 is only one of the many consequences of our way of life. And therefore not the cause of our problems!)

The often envisaged sustainable development with (also corona) money is therefore rarely sustainable. And investing Corona money into solutions that are not a solution brings us closer to the figurative abyss.

A government throwing with money is also one of the flaws in our money system: a government cannot in principle go bankrupt, it buries itself in debts that in principle will never (have to) be paid off. Investing in order to prevent bankruptcies of companies. While bankruptcies can help society as a whole, there is in fact little effect in society: the knowledge is not gone, the machines are not broken, the people have not disappeared, the contacts and networks are still there, as is the database, etc. The only thing that is gone is ‘money’.

In other words, everything of real value is still there. The worthless, the ‘paper’ money, is gone. Which becomes even more obvious after a restart of the company: often by someone else, but that makes no difference from a system technical point of view, the machines are used again, the knowledge is used again, people have work again. The owner has changed and money flows differently, but those are the least important things in the big picture. (I can also go bankrupt privately, which is a problem, for myself then, but not that technically relevant.)

And if there is no restart? Then it is apparently not worth the effort, then nobody sees anything in the clientele, the knowledge or the machines, or in the combination. People are taken over by someone else with their network, or retrained for another profession, machines auctioned, etc., When its useful, things will find their way. So what is the problem of bankruptcy? Except for a change in money flows, nothing really. And that lost money is actually not important.

The real big problem is when companies (instead of people) are saved, by a government throwing money, that do not earn it, that de facto no longer has a market, or for which it can be predicted that the knowledge and expertise will be outdated in the short term. That is, wasted effort, or delays in development or transition.

I hear and read a lot about money system reforms, where money is distributed more fairly and has more effect locally. But then you have improved the financial system. Rightly so. But that also does not by definition help sustainability or avoid climate change. In terms of sustainability, its not relevant, since if the same amount of money is distributed , though more fairly, the expenditure and therefore the related environmental impact, will remain the same.

However, doing nothing, that is, not changing anything, also brings us closer to the abyss. Ergo, the abyss is almost inevitable. Abyss in this means: The system as a whole is eroding, globally, and for the globe there is no one who can take over …. . The collapse of the institutions (we are already seeing this happening), the collapse of global trade (it seems that this will already decline after the corona), the complexity of societies is decreasing, and eventually the entire financial system will collapse. And then there is nothing left to save or to invest in other things. The whole of society falls back to a basic level, in which we have to get by locally again, with much less globalized entertainment , and perhaps even move to different place if it gets too hot or due to floods. Maslow’s pyramid is being dismantled from top to bottom. At least, it shrinks, it becomes less in all layers of that pyramid. (and yes, cultural and social activities are the first to decrease a lot, or take place in a much more narrow environment, we can already see that). No wonder, when the foundation underneath the pyramid, the resource stocks , collapse since we keep on spending money in under’mining’ these foundations. [x] (see video)

The current approach is one of gentle healers . It is guaranteed to never go fast enough, there is no sign of a lockdown regarding CO2 [x], or major climate interventions, or counter biodiversity losses, etc. So the slow changes keep fossil activities fester for much longer, and therefore cause more damage than necessary. Take California last week: (From the Los Angeles Times of September 1 [x]):

State officials threw a lifeline to four fossil fueled power plants along the Southern California coast, deciding the facilities are still needed to provide reliable electricity even as they contribute to the climate crisis.

Tuesday’s vote by the State Water Resources Control Board to let the gas plants keep operating past the end of this year followed brief rolling blackouts over two evenings last month, as a heat wave caused air conditioning demand to soar, and California found itself short on electricity supplies.

A deadline for closing these fossil power plants was already set 10 years ago. In the meantime, energy use has only increased, and climate change has made it warmer, so more cooling has been installed, and thus energy use has driven up even further. And now, 10 years later, they find they can no longer close the power plants … The energy demand is too high, renewable production cannot keep up, and closure would lead to power outages. At the same time, keeping them open increases climate heating , and increases cooling demand at the same time, and therefore energy demand. I can guarantee you, they will not be closed for years to come. This is how it always goes, and the conclusions are obvious: firstly, comfort continues to take precedence, remains starting point for money and energy distribution, and so energy demand continues to rise. And secondly, planning for the long term doesn’t work, it is overtaking itself. (also think of Dutch data centers whose growth in demand for green energy is faster than we can build offshore wind farms [x]). In other words, take immediate and severe action, otherwise preventing (among others) global warming is a farce.

But a real direct approach is not envisaged, despite all the money available, and neither is a CO2 lockdown expected, and in that case it might be better to spent as much as possible as fast as possible, so that the time to the real blow is shortened. Slow changes gives bad practices more time to proliferate and thus cause more damage. And so, strangely enough, if other methods aren’t available or executed, this still seems like the best approach: throwing more money at it, driving up energy and material waste and exhaustion, (because that’s what money does, and is even intended for : produce and consume, by definition). And thus accelerate the collapse of the global system.

To continue the evolution from once ‘living together’ to the current ‘spending together’. And when the smoke has gone, we start with a clean sheet. Some of us.

if banks too big to fail, what about oil multinationals or foodmonopolists...?