The earth in fact is one big island, on which we have to try to survive. Which was until recently not such a big deal, but with 7 billion of, and increasing to 9,5 billion by 2050, its about time to start organizing and distributing things a bit more tightly and neatly.

Its of course not easy to oversee, such a big island , and in presentations I usually use a small imaginary island to illustrate what is and what is not possible.

Small or large, the principle remains the same, there is a limited stock of all kind of things, and only the sun , or derivatives like wind, are a contribution to the potential of that Island. ( the so called Exergy, potential of energy/work that is available to change things) . So far, I was not aware of a modern example of a (small) island situation which operated independent on the basis of own resources and incoming energy. 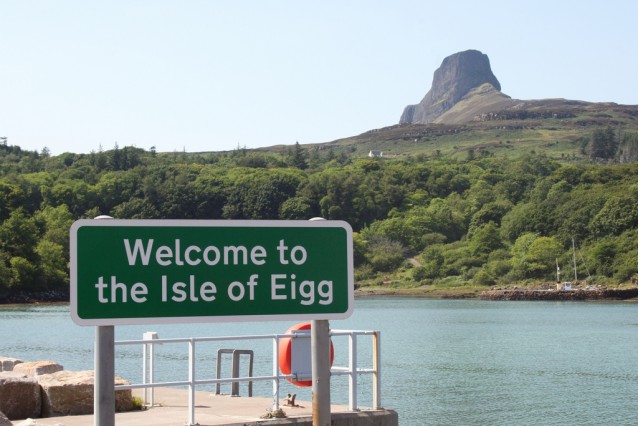 asked to evaluate student plans from the Master of architecture at the University of Dundee in Scotland. Al plans turned out to have the Isle of Eigg , just of the Scottish West cost , as location for their (housing) plans. Why Eigg? Since something special is happening there. About twenty years ago the inhabitants of Eigg were completely fed up with their situation: Nothing happened on the island, which was still in the hands of a prehistoric Landlord, which did not invest and even dis not show up on the Island anymore. After years of negotiations, and a early form of crowd-funding the succeeded in forcing the Landlord to sell the Island. The inhabitants became the joint owners of their own land. Its about 30 km2 large , mainly a mountain and some lowland in a valley like setting, with around 80 inhabitants. And now being owners. Since then its an example of a kind of modern commons, the shared care-taking of land and resources as was “ common’ in the past in England . Decisions are taken jointly , and in Eigg that shared ownership is placed in a Trust. Even the the houses are part of the Trust, and inhabitants lease their houses from their own trust .

To be owner is one thing, but what next? Well, a next step was taken about 8 years ago. Their own shared renewable energy supply system came into operation. Until then all was driven by Diesel generators, since the Island has no connection to the mainland grid. The generators went off, what a silence, and energy is now produced by from a combination of sources and conversions: 3 small wind-turbines, Solar PV panels, and 3 small hydro-power installations, which also function as small storage units. There is also a battery room, as an extra storage backup in the system, as well as a second back up by some remaining diesel generators, to guarantee 100% operationalization. The whole Is controlled and steered by a power management system, and as shown in practice the island runs on renewable energy for 98 % of time. En they are now not only independent of a land owner, but also nearly completely from fossil fuels.

There are some interesting features however connected to the energy system: its bound to a maximum production of course. And thats a very special thing about it all: the inhabitants collectively decided to limit their house connection to 5 kW maximum, whereas for instance in the Netherlands 3x5kW is the least. ( for small enterprises the max is 10 kW) . And besides that: They all agreed to a signaling system: Every house has a kind of traffic light : green implies everything is normal, as it turns yellow everyone knows its not the time to do heavy energy jobs like laundry machines, and red means stick to minimum energy demand. Voluntarily, and it works,.Its a beautiful example of living according to availability, and therefor behavior adaptation. In My country its a taboo to think of people limiting or adapting needs and wants , due to resource issues: We want to innovate our way out of trouble, maintaining and even improving living standards…

Anyway, a recent price in a award competition gained them another 300.000 Euro, which will be invested in further sustaining their island: in solar collectors for water-heating, insulation of houses, local transport and their own food production.

And the next step is logically to look into materials resources for construction, and that where the students of Dundee university came in. They made an investigation or resource potentials in the island, explored historic ways of construction using these building materials, to further develop modern ways of island construction. A few houses are needed as well as some guest rooms for visitors. Thats what they are designing now. Very interesting.

And so it all seems possible: to take responsibility and live within island borders. Of course, still some work to do, but nevertheless, in Eigg they are prepared for the future, and I have my example.

Maybe, it has similarities with the feeling people on the main island (UK), had in mind , though unknowingly, when voting for a Brexit…

[1] Elinor Ostrom , 1990, Governing of the Commons , The evolution of institutions for collective action http://wtf.tw/ref/ostrom_1990.pdf

[2] Jeremy Rifkin , 2014, The Zero Marginal Cost Society: The Internet of Things, the Collaborative Commons, and the Eclipse of Capitalism . http://www.thezeromarginalcostsociety.com/