Lets be honest: there are 17 UN sustainable development goals launched recently, and who can oppose these? [1] What is against peace and justice? Or against good health? Or even innovation in industry? OK, the interpretation might be a little bit different depending your culture, but in the long run people will not deny these goals.

There are however some thoughts with the list. As for instance: Affordable and clean energy: for clean energy, I can think of some good solutions. But affordable? Reasonably priced? In which context? Within the current financial economic system? Which subsidizes fossil fuels? That works from the premises that making profit is the target, based on free exploitation of resources? ( air, water, mined materials) In general its clear now that the financial system has to be thoroughly redeveloped , to value resources in a different way, to give transition a chance. And not the least, its probably meant as a Western economic system, a system that as an example leads to “ innovations “ like disease resistant crops, for which farmers have to buy seeds each year since they cant be propagated by them . Which leads to the situation that 62 people have as much money as the poorest half of the world, or 1 % as much as the other 99% . [2]

Using that same system to provide everybody with clean affordable energy is a farce. Despite a target called decent work and economic growth. Decent work again I can understand, but growth? Growth is based on money, and money is based on creating debt, not only financial debt, but more so real materialized debts: resources are faster exhausted as can be regenerated, creating a debt for our children: lack in resources, soil exhausted and even water stocks depleted for years: by irrigation, and by pumping rivers dry like the Colorado river to supply for instance desert resorts like Las Vegas where we can throw our money away. The 1 % that is.
However, what I understand the least is the order of targets presented the numbering or ranking. I cant see any coherence there, There seems neither rhyme nor reason to it , and in some cases the one is the result of the other. Why is poverty at the first place? Is it poverty in money , or in resources? Then why not put resources first? Responsible consumption and production, comes after industry innovation and infrastructure. Is not the last one a derivative of the former? Even stronger, int that the result : sustainable consumption determines the border within which industry has to operate, and what and where to innovate. It is in the end Sustainable development targets we are talking about.

I think it requires a some modification. As I always stress in lectures regarding resource management and closing cycles: even within resources not everyone is equal, there is a ranking of importance among resources. If arriving at a uninhabited island, which is the first concern? Indeed, its clean water. Without that, its dead in three days. Etc, I explained that in a previous blog. [3]. Before water is air ( dead in 3 minutes, but usually no problem,) and after water its food (dead in 3 months) . Next are materials (protection against climate and other threats, 3 years) and only after that comes energy in a external form. In one of workshops preparing the goals, in which I could participate, we even discussed concrete targets for resources: how much material water and food should everyone have. But the point did not make it in the official discussions, neither did ranking in importance. 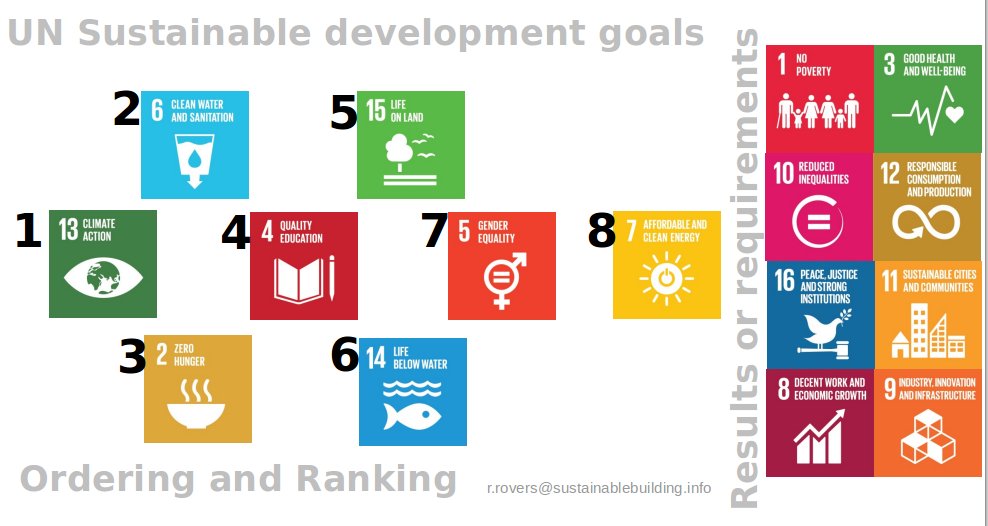 Which leads to the Illustration with importance from left to right: To begin with: water and food for everyone in sufficient quantity, with directly coupled to that life on land and life below water: These are our resource reservoirs ( even for materials) to be secured to the highest degree.

In between there is Education since if you think this over, then progress is hardly possible if we don’t tell and learn each other the solutions, if we don’t share the knowledge. With everyone, and not after paying a fee since its is patented, and not only the male half of the world. Thats why gender equality is next to education. Education and gender equality are in fact two social conditions in order to share the resource base.
And then indeed follows energy , in so far as we can arrange that on a renewable basis, after everyone has food and drinks, and a decent shelter, from whats left over to produce materials *

Al other goals are in my view derivatives from these core issues, they are tools to secure the basic circumstance, which we will have to transform and adapt to make it work. Not the other way around: that these become guiding for our resource situation. We will still have to see how economy looks like to support this, which innovations are needed, and maybe even require de-growth to avoid main stress in our system. And yes, a result will be living in peace and in sustainable settlements. There is no other result possible. Please think it over yourself.

There is however one problem: we are fast moving into the wrong direction, with Climate change with enormous threatening impact as a result, and if we fail to tackle this, the other targets have not a chance at all. Reason why I have moved that target to the front: its a prerequisite for all others, if not solved , all other efforts are like bringing water to the see. ( dutch expression) . And mind you, climate change does not wait for us to adapt. We will have to change first.
We are nearly there. There is one other issue,  that is a missing target. Not often discussed, and sometime seven taboo: to put it decently: family planning, to put it boldly: overpopulation. There were early warnings by a guy called Malthus, then there was a few decades ago a book by Paul and Anne Ehrlich: “Population Bomb” , and recently two excellent books: Peoplequacke by Fred Pearce and Countdown by Alan Weisman. Just after Ehrlich’s book was published, agriculture went through a revolution, which delayed his predictions: productivity in agriculture increased enormously by all kinds of new technologies. Weisman excellently describes this in his recent book. At the same time he tours along international experts in the field, the ones daily dealing with agriculture research , and there no sign at all that another revolution like that is expected. Agriculture improvements nowadays are marginal, and even have themselves unexpected side effects. Momentarily population growth faster as food productivity. Weisman visited many countries, and makes impressive reports on how people feel about having children, and how countries deal with these issues . The overall message is that, in many places, its going the right direction ( however the total is still frightening) . But also, that in places where women can make their own choices, they choose to plan and have lesser children . Which leads to the final conclusion that gender equality could stand for population and should move up to the front of the target ranking…