It has been a year since the Dutch version of the book was published, Gebroken Kringlopen (Broken Cycles). I handed out the first copy to Marjan Minnesma, who is on top of the required transition with NGO Urgenda.

The English translation came out last month under the name “People vs Resources – restoring a world out of balance”. I was allowed to hand out the first copies at the SBE19 conference in Graz, to the colleagues with whom I am trying to put the carbon budget for buildings on the map. [1] 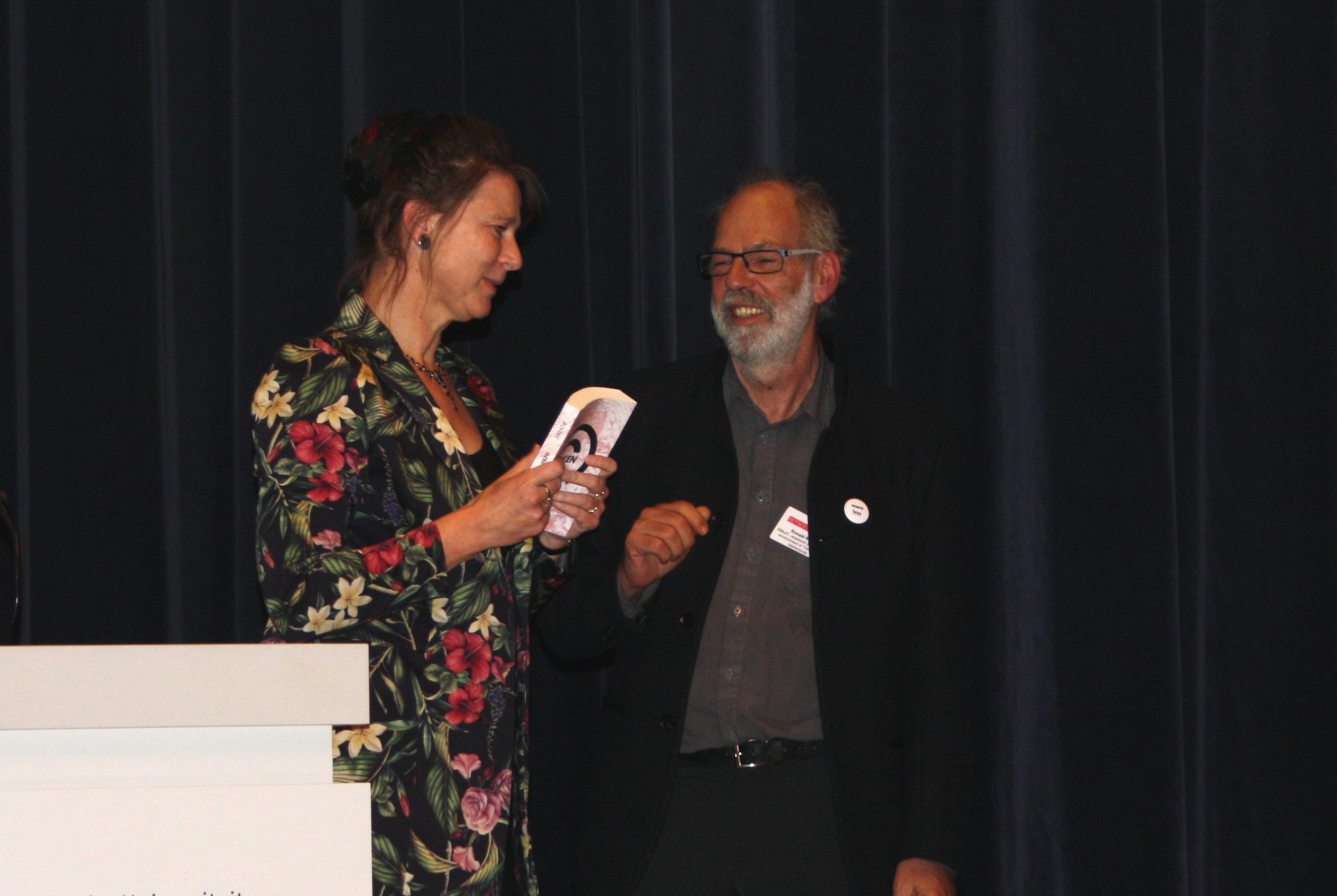 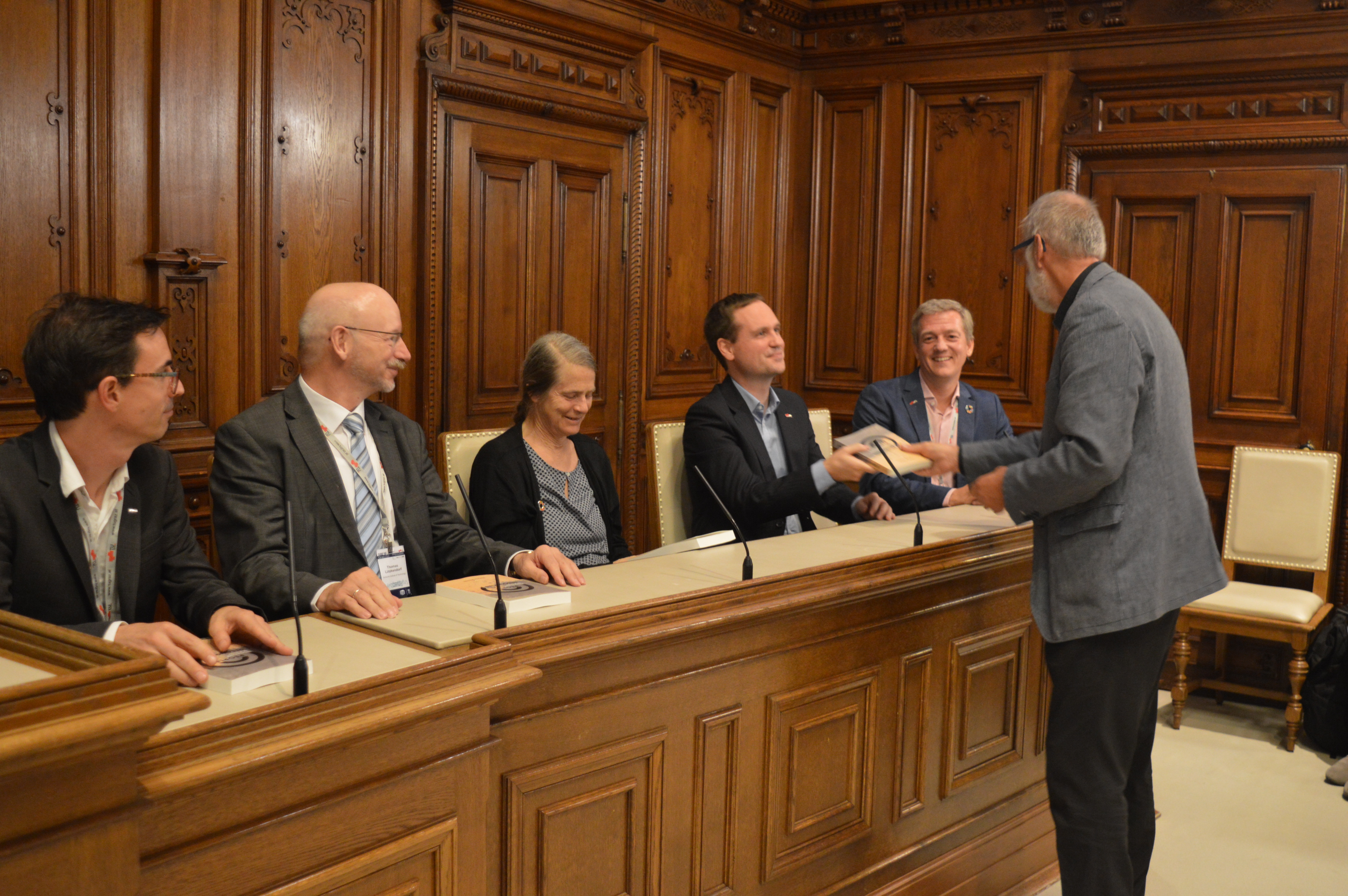 I have been able to give many lectures on both books past year, about the content of course, and had a lot of interesting discussions. There have also been some reviews and interviews about the Dutch book in particular. [2] . In general, it is sometimes perceived as pessimistic, while it is in fact realistic : Look at things clearly, then analyze and accept, and then respond. Perhaps that is because people have an over-optimistic image of the world, or are presented over-optimistic solutions by opportunistic special interest groups. Reality is then soon seen as threatening and pessimism. But first, the distorted image of reality must be adjusted. That false optimism leads to denial was made clear by the discussion in a national newspaper, de Volkskrant, which in a review even dismissed it as Doomsday Thinking. Strange enough the review was limited to the preface of the book, not to its actual content. I underestimated that reaction, in the English version “the world on fire” as preface title has been replaced by “a world out of Balance”. (Ironically, there were a huge number of fires last summer, from the Amazon to even the polar region. [3].)

However, the signs that we are facing enormous challenges are becoming increasingly clear. It is starting to hurt, also on a political level: the borders are coming anxiously close. With CO2 and climate heating* of course, it was more than 40 degrees Celsius here in my area of Eindhoven, it never occurred before. But also with nitrogen, thousands of building projects are on halt currently in the Netherlands because construction is not allowed due to excessive nitrogen levels. In principle, Schiphol should therefore no longer allowed to expand, it should even shrink, just like the immense cattle breeding should be downscaled. Which would not have to be such a big problem, since those sectors are mainly focused on export. This enormous export also has caused that the Netherlands is short of people in health care and education, because growth is advocated  and salaries in export sectors are higher. A little less export, and everyone can work in the basic services.

Even in the Netherlands, now, the drinking water supply is under pressure after two very dry summers. And then there are chemical contaminants in the soil, pfas as they are called, as a result of which soil may no longer be processed or transported. In addition, the land is sinking below sea level , while the sea level is rising.

The boundaries are therefore becoming visible, coming to the surface, and will only become more compelling.

It is therefore important to make this coherence negotiable and to look for solutions in an integrated manner.

In the book I analyzed that on the basis of the two main players in imbalance: the People and he Planet , as in People vs Resources. And then R / P is the ratio between the two: the maximized amount of resources on a finite planet, divided by an ever-growing world population with an insatiable hunger for more. In the past year I have only been strengthened in my analyses, that it is precisely this relationship, that dichotomy, where the problem lies: the focus is on people, and their central role, and not on the systems that enable them and their prosperity. Where politically people are confirmed in their lifestyle, that should support unlimited needs and wishes, (economy must grow) , and no one dare address the fact that the other, the sources, are limited. [4]

Harari in his books Sapiens and Homo Deo expresses this mercilessly : [5]

“Sapiens have therefore been living in a double reality since the cognitive revolution. On the one hand you have the objective reality of rivers, trees and lions, on the other you have the imaginary reality of gods, nations and corporations. Over the years, the imaginary reality became stronger, so that the bare survival of river trees and lions nowadays depends on the grace of imaginary entities such as gods, nations and corporations. “

I could not have expressed it more effectively, it is exactly what is going on and why sapiens, the P of People, just don’t want to adapt to the R, from available resources.

It is much more ingrained than I thought: man still sees himself as central to the universe, or at least on earth, and everything else is subordinate to it. With Harari’s direct framing it is: trees, rivers, lions divided by gods, nations and corporations …. I will not go again into the economic system that is designed in such a way that that people can exhaust that system without obligation, and therefore humankind  is confirmed in its feeling to be in power. But the number of books that analyze this and consider it untenable is a rapidly growing stack.

But also on the raw material side (the ‘trees rivers lions’), I get confirmed in my analyses of how it actually works, that every system is limited in speed and volume of resource use, in order to achieve an optimal result . That is, initially not. Initially a species strives for Maximum Power. A principle that is proposed as a 4th law of thermodynamics, although it has not yet crystallized. ( the other laws, give direction, but do not specify how and what)

This was elaborated later on in a “max power principle” via, among others, Odum and Pinkerton [7]: every kind or system strives to maximize power, power and not necessarily maximum efficiency. That is the time factor that is reintroduced here: Applying as much as possible in the shortest possible time determines whether one species wins over the other, or system. Odum: “Man, like the plant, is ordinarily interested in power output, not efficiency.” Increasing efficiency would yield much less per unit of time. Hall, known for his work on EROI, also describes the relationship with Max Power in his recent book on EROI, and gives the example of the coal-fired power plant: which can operate at a higher efficiency, but then the power output is lower. [8]

Also look at agriculture: this too maximizes capacity: the output per hectare of land is constantly increasing. That is possible, following Lotke, as long as there is an unused part of mass and energy in the system available: here the system is the earth as a whole, where agriculture invests immense amounts of other sources to increase that output, such as fossil fuels in fertilizer and in other processes supporting agriculture, In [9] I already described that 6 times as much energy enters as energy comes out as food. That is how Max power works in open systems, with freely available sources.

Incidentally, this is also to be elaborated for humanity as a whole: it strives for Max power, symbolized by multinationals that are increasingly appropriating themselves, and thus winning from competitors who only manage to generate less power, who then ultimately do not have access to those sources anymore and die. It is evolution new style. And everything seems to indicate that humanity cannot escape this. As Harari’s analysis shows how humanity functions, as well as Van Bavel’s ‘the invisible hand’ (in Dutch) describes how economies keep getting out of hand (and also collapse again). With Max Power in mind very explainable …. [10] [11]

By the way, in Max Power, inefficiencies and leaks (waste, emissions) outside the system are taken for granted. The Max Power approach must therefore be adjusted to a lower max, when the resources are used up, or the side effects change the circumstances, such as climate change, or depletion of raw materials. Max power is not fixed, the maximum depends on those circumstances.

The species can therefore proliferate, and force other species to surrender. However, since a system is ultimately limited, it can collapse because circumstances change or free access to resources is limited. For a sustainable state, a species should therefore not aim for max power measurement, but for max efficiency, which means a much lower speed and growth. But if Max Power is correct, and people cannot escape it, then that will not happen automatically. Since the sustainable approach will be ‘outpowered’.

The Max Power Principle is still debated , though it has become very plausible.

If we translate that back to sources, to ‘trees, rivers and lions’, and at the scale level of the earth, then an optimal power at max efficiency situation is possible (in contrast to max power and optimal efficiency) , whereby the closed system earth can be balanced, in use and speed of sources, and can grow slightly through maximum efficiency of use of the one source from outside the system: the sun (energy). And thus leading to a balanced and sustainable system functioning. For the growth of plants, that will probably be the efficiency of natural growth and photosynthesis, despite attempts to increase it technically, the system has, after an eternity of evolution, settled this at a 1 or 2 % efficiency , within a limited supply of sources (in a closed system with only sun as input) . So with land as the greatest common denominator, as an intermediary, for ecosystems, and time or inertia as given, much slower as a theoretical maximum power output, but within the circumstances it is sustainable. Mankind tries to surpass that , the probably natural urge for Max Power, but will eventually have to adapt, it is not an open system with regard to raw materials. Despite “gods nations and corporations.”

In the book I come to the conclusion that perhaps the level of prosperity of the early 1960s could be sustained, “in speed of life”, when we were still hanging the laundry on the clothesline, instead of in tumble dryers powered by (still to be built) wind turbines.

But of course that is not going to happen. See the battle that is already underway, for power and resources, between the US and China, and see the still globally rising CO2 emissions. But what then, how are things going? And is that inevitable, is that evolution? And what will ultimately prove to be ‘value’? And what kind of value …? I am now reading and writing about this. Hopefully someday interesting enough for a book ….

* I agree with The Guardian Newspaper, that adapted their language guide, not to speak of global warming anymore but of global heating and of climate emergency.

we left the planet to the multinationals and the billionaires, and now we have to buy it back...