It sometimes seems that the built environment, and the adjustments to achieve a sustainable society, are of the same nature everywhere. But that is by no means the case when we zoom out, to Europe for example. There should be no less than 250 million homes become energy-neutral.* [1] A higher scale level of analysis and observation makes it clear that the solutions will be different for each region, and that analyzes show different solutions, as considerations per individual home.

Water food material and energy are highly dependent on nature and climate at a particular location. For example, Sweden will not have a direct lack of renewable building material, but the yield of, for example, solar panels is much lower than on southern latitudes. On the other hand, Sweden and Norway can of course rely heavily on hydro-power. But the Baltic states, which have about the same insolation, do not have that advantage. If we only look at energy, especially with regard to heating homes, it is also clear that the more northerly, there is not only is less solar energy to gain, but also a basically larger heating requirement. After all, it is colder and often also cold periods last longer. Which is a double problem, and from that point of view, its wasn’t in the past a smart decision to live there. It is also a question of whether , In comparing energy demands, you should be allowed to average energy demand : to consider he location a given, and filter out the climate differences between countries as sometimes is practice. Its should be clear that those who ‘choose’ to live in a cold area will also have more greater energy demands. And / or cause more material impact because more insulation is needed, or extra solar panels. That’s the way it is. These burdens should not be hidden, just like any benefits of a location.

More interesting, however, is the number of m2’s per house, or better: m2 per capita occupied. [2] which has a direct relationship with the energy demand: More m2 is more heating needs. At least, if the m2’s are indeed heated. But apart from that discussion (later more) , lets first have a look at the European statistics [x]: they show that the most m2 per person are occupied by the Luxembourgers, preferably 66m2 per person, and the least by Romanians, only 15 m2 per person. Regardless of the climate, less m2 is less energy demand anyway! In this case a factor of 4 …

These two are however exceptions, the majority is between 25 and 50 m2. Which still gives a factor 2 difference.

Even more interesting is how this m2 is divided over various climate zones. The countries bordering the North Sea have a slightly milder climate than the eastern states with a more continental climate.

If we also include the latitudes, it becomes all the more interesting: after all, that determines with how many m2 solar panels are required to heat the m2’s in an energy-neutral or zero-energy way. Supposing a all electric model for the major European housing transition renovation. With little occupied m2 in an area with low solar radiation, that compensates somewhat, and vice versa. The drawing shows the number of m2 pp and the solar irradiation. 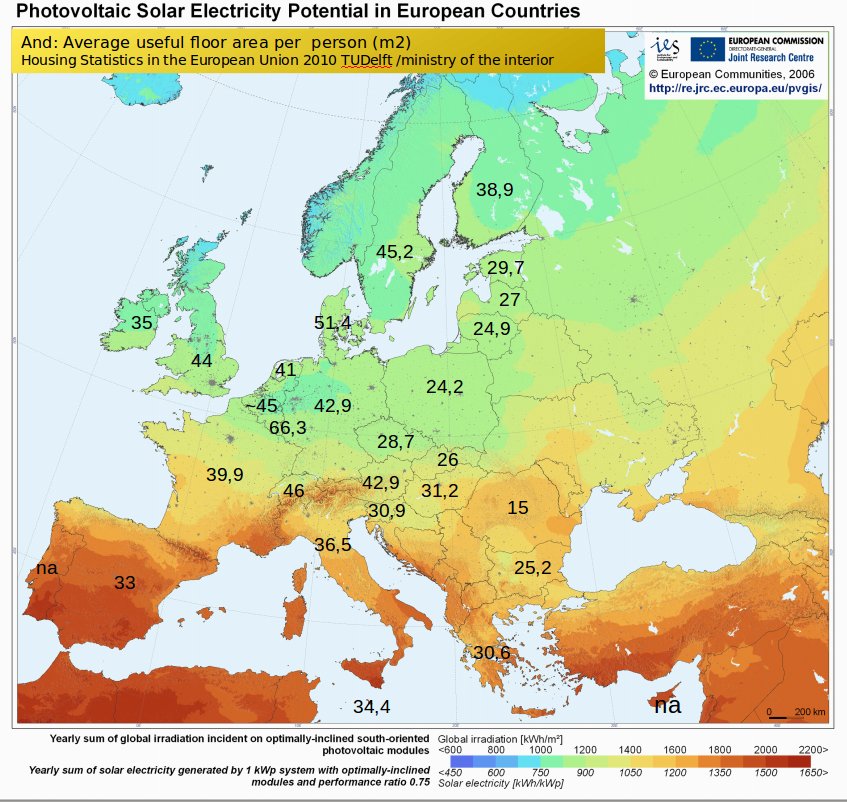 We immediately see that the southern countries have less m2 than the more north-western countries, which therefor have in principle more energy demand, and less solar supply.

Central and eastern European countries have less solar potential, but also significantly less m2 to heat. Sweden is clearly in the ‘danger zone’: many m2 pp, and low solar potential, especially in winter. Romania, on the other hand, is in ‘the best’ position: very little m2 per capita, and high solar radiation. (Although Sweden already exceeds 50%, when it comes to sustainable (renewable) energy generation. However if they would live on less m2, that share would have been much higher. The Netherlands is only just above 7% of renewable energy). [3]

The picture clearly shows that a proportional distribution of, for example, European subsidies over the countries would not be entirely fair: who is going to live in the northern part of the continent, and then also occupy a huge floor area, which then has to be heated? That costs a lot of material and production capacity: the material requirement itself already produces enormous CO2 emissions that can no longer be maintained under the 1.5-degree scenario, as I have already calculated for Dutch residential construction [4]

And so this picture shows that less (heated) m2 pp , or reducing m2, is almost inevitable. Either by limiting the space habitable during cold periods, or by living smaller in general for a large part of Europe. It is striking that the warmer regions in Europe, inhabit a clearly lower number of m2 per person as North West Europeans, while they also have a much higher solar energy potential. Middle and north Eastern European countries have lower solar radiation but also significantly less m2 per person to heat. The most favorable is surprisingly Romania: It can have cold winters, but already have little m2 to heat, and a potentially high solar yield.

Of course this is only indicative, and to illustrate the challenge as it lies ahead across Europe. More aspects play a role: such as house type and roof surface. And then Baltic and central European countries are strongly in favor: because they mainly live in apartment complexes, so the heating requirement is in principle already lower than for terraced or detached houses. The disadvantage is that with apartment blocks a smaller roof area per housing unit is available, to potentially generate the energy.

Regarding the Netherlands: we are above average in terms of m2, and almost everyone lives in a terraced house with a sloping roof, so relatively a lot of outside surface: That is, requiring a lot of material use when the whole house is to be packed in insulation, but , on the other hand relatively much roof surface for generation by solar panels is available ( which in turn has a high material impact) . With for instance a ‘ Summer-Winter Dwelling” concept, where only a central living space is heated in the coldest periods, the use of material can be limited, with a high potential of PV on the roof, with an average European sun irradiation.

As far as new construction is concerned, it could be argued that in fact the design should be based on the potential energy yield of a building lot, and adjust the house accordingly, so as to remain within the margins for a energy neutral or 0-energy housing, in which CO2 emission free occupation is possible. (: ‘ climate neutral’ , incl. material use, and heated m2) [5]

For Europe as a whole, you could take the potential per country of renewable energy yield as a measure for the maximum optimally climate-friendly floor surface (including the energy impact of materials) and then spread it over the inhabitants. But that may be a bit too progressive approach…

*  The EU housing stock consists of around 250 million dwellings. Which all in some way “consume” energy for operational use, which is mostly fossil energy. The EU has set a target to reduce this fossil energy , and related CO2 emissions, by its communication known as the “EPBD recast” , stating that all buildings/houses in some way should be transformed to operate with “nearly zero or very low amount of energy required”

This is no sinecure, since this housing stock is very divers, is in different climate zones with different heating and cooling demands. Besides, there is different ownership situations, , different market organization and regulations.

Here is a short introduction into this housing stock, to have some insight in the task ahead of us.

Regarding the oldest fraction, before world War II , Finland, Slovakia, Greece and Cyprus have the least, less than 1 in 10 dwellings built before 1946, By contrast, more than one third of the housing stock in Denmark, Belgium and the United Kingdom was constructed prior to 1946 [7]

Another significant difference is the housing costs: it varies from 20% to 40% of income in the EU-28. Which on one side shows that the interest in reducing those costs might be high, but at the same time the remaining budget to invest might be low for that same group. And vice versa.

Interesting in the light of energy reduction, is also the type of dwellings and the distribution of population per dwelling (ill.3) . [8]

The main difference is between people in flats/apartment blocks, and the ones in individual houses. (terraced, semi detached and detached) This is a significant difference in the light of potential solar energy generation on or nearby the house: The average roof surface per house and per inhabitant differs greatly.