A few months ago I wrote about agriculture, and that the EROI was 0.16: 1 (energy return on (energy) investment) – on average across all agricultural products in the Netherlands, and the EL (Embodied Land) no less than 7.7 ha-year / ha year. Much more goes in than comes out, a large energy destruction machine, so to speak. [1]

Now it happens that I am involved in an agricultural project; ‘Enriching Agriculture’. And whoever says A must also say B: in other words, if the current agricultural plan is plan A, what is plan B, or an agriculture that yields more than it costs? That does not exhaust the soil, that can function as a cycle system forever. That is the central question in the project.

Farmers and the like then dive straight into the soil; what is the quality of the soil, which nutrients are in it (almost none anymore in the Netherlands, hence all that artificial fertilizer), not unimportant , but any analyses will still have to start with the very first physical consideration: if more energy enters than comes out , its not a smart approach. That is also the strange thing about farmers; they mainly look at the output. ..

The latter recently was illustrated with an analysis by researchers, that wrote that we had a wrong look at agriculture: “usually the environmental effects of agriculture per hectare are considered. To get a clearer picture, you have to look at the environmental impact per unit of product, for example a kilo of milk protein or a ton of grain. ”“ If you need less land for that production, there is more room for nature. Intensive farming systems have an advantage here that is usually overlooked, the researchers write. “[2]

Unbelievable: in both cases, however, the input and its effects, and the use of space elsewhere, are not taken into account. Last week again, this time in a opinion debate in the Dutch journal NRC, scientists argue for intensive agriculture, or in other words: intensive depletion of sources elsewhere to get more product over here. [3]

Current agriculture is unsustainable, the land is as dead , and even with an enormous amount of aggregates, there are estimates that there are only as many as 60 harvests left, before agriculture yields completely ceases, for example for the UK. [4] And that is a biologic consideration. From a physical point of view it has already long been a destructive system, so we don’t even have to get into all kinds of biological discussions to declare agriculture dead. In this time of climate change and energy-related CO2 emissions, it is already proven to be obsolete.

Start with a physical analysis, before a geo-biological analyses. If it does not produce any energy-physical benefits, it cannot be sustained. There are indeed many processes that just cause some exhaustion, that is unavoidable on a finite planet. But energy does not belong to that, we have an infinite source of it, which we can use to enrich, rather than exhaust the system.

At an agricultural system level, it is mainly solar energy that can be counted as profit, free of charge without impact on the stocks already present within the system. Agriculture (among others) can yield more than we put into it. And help to let society grow, instead of depleting inside stocks.

For too long in agriculture that has been ignored: Instead of using that solar energy, and considering that as a given for the yield, we started to use raw materials from within the system at increasing amounts to boost per hectare of yield. As a result, depletion of the land itself, but also depletion of raw materials elsewhere. For which, in order to compensate that process, land is needed for sources from elsewhere, as well as renewable (solar) energy, for which again, land is needed . The beast has bitten itself in the tail.

Therefore we are looking for a system that yields more as we put in, and preferably much more, because the processing of agricultural products also results in losses in the chain. If current agriculture is one side of the spectrum, then what’s at the other end of the spectrum: the dot on the horizon to see how far we can get in that profitable direction?

To find such a reference plan B, we must first of all think of labor. After all, that is where the agricultural products end up in, and it happens that to keep cycles closed it is true that if you put something in, something has to come out to keep the business going. So the work that can be supplied by that consumed food, is the most effective source of energy, and the shortest chain with the least losses for the same agriculture. If we count that 1 person can live from 3000 m2 of agricultural produce ( with current agriculture) [5], then it is obvious that his labor can provide a yield from a much larger piece of land than necessary, and thus yields net profit. That was also the principle of slavery labor in the US at the time. But it is of course also possible without immediately returning to slavery.

Then what is an ideal point on the horizon, the ultimate hectare that yields much more than is put in exosomatically? With Solar energy as the free and net profit? For me, one stands out as a reference: The food forest: after installing it provides a more or less independently operating system from which to harvest every year without the system deteriorating. (There will undoubtedly be more to say about that biologically, but it works as a first indicative reference). There are cheering stories about it, however few data, so I have made a small indicative calculation myself: take a hectare with half of fruit and half of nuts. Without including the underlying layers of a food forest, the calculated output consists of about 15 tons of apples and about 2 tons of nuts as an annual harvest. [6.7]. Converted this provides 89 GJ of food energy.

The labor involved is harvesting itself, for which data are available [8]: approx. 40 days for the apples, and approx. 17 days for nuts, makes 57 days in total (or 1/7 person-year, one day a week) ) Add to this maintenance of the food forest, say 1 day a week ,which basically functions independently, but still, then that is 2/7 person-year that enters as labor, is energy.

The energy requirement of a person is approximately 10 kJ per day, or 3.65 GJ per year, 2/7 is then approximately 1GJ input. Which gives an EROI of 89 : 1! Especially thanks to the free solar energy. There is still much to criticize this calculation, such as in the first few years it does not yield very much, on the other side the yields of the underlays are also not included, while the large apple harvest probably requires a bit more labor, etc. etc. But it gives an initial indication of a reference for agriculture.

EROI is not the same initially as how many people could live from such a food forest: it would be around 25/ha, albeit on a diet of nuts and fruits. However, we could also interpret this as EROI: assuming that 1 person is needed to manage and harvest that hectare (and has a short working week), 25 people can live on that. Then 1 person delivers input for 25 people output per hectare, a “people” PROPI of 25: 1 (People Return on People Investment…,with people as the energy conversion system), The Real EROI will be somewhere between those 25 and 89. In the graph I took 25 as the lower limit, as a conservative estimate for a food forest.

All other farming systems, such as bio-ecological and permaculture, are somewhere in between modern agriculture and the food forest. In the literature some other calculations were found, such as an average EROI for agriculture in Denmark of 0.25: 1, [9] , a study of Icelandic systems, both normal and organic farmers. This study shows that the EROI is improving with larger farms, for example. In the table I have taken two: the average traditional farm and the best-scoring organic farm (dairy products) [10]

There is also a study that shows, among other things, the EROI of wheat in Kenya: (by Pimentel, one of the pioneers with regard to EROI calculations in agriculture) [11]

All these figures have not been checked for consistency: like that they have aused similar system boundaries, or whether they have included 1st, 2nd or 3rd line effects. They have been included purely as an indication, so that there is some sense of dimensions.

And then there is the Polyface farming from Salatin. Which received a lot of attention after Pollan wrote about it. A form of integral and inclusive agriculture, very successful, and Salatin regularly gives lectures on this approach. From Pollan’s book [12] and figures on the internet [13] I estimated an EROI of: 0.52:1 for their meat production. Much better, but still does not reach the 1: 1. 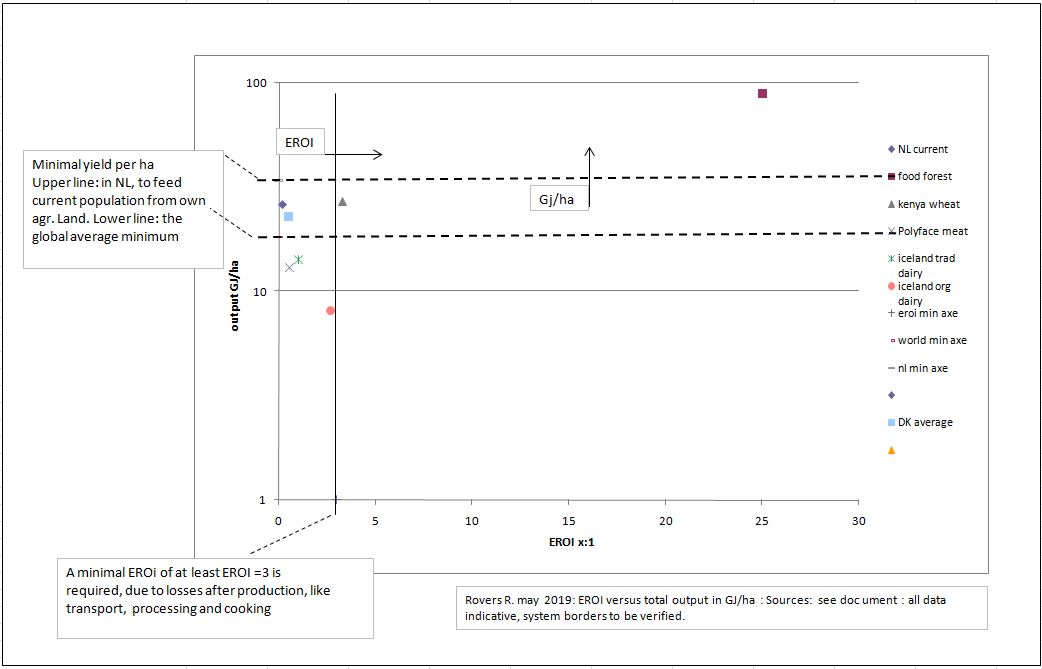 The graph with all these data has the EROI on one axis, and the other axis is the output in food energy value. That seemed to me to be the most relevant, since the output from agricultural systems naturally have the intention of feeding people.

With this graph, the question remaining is what are minimal values to be established for both EROI and output? EROI was already outlined above, that should be at least 3. (1: 3)

But what about the yield? For instance, what is the minimum output required to provide all Dutch people with a minimal food package in terms of energy, cq kcal or MJ, for example, within Dutch agricultural surface area? For NL, that is: 17.5 million inhabitants x 3.65 GJ / year, and divided by agricultural area: (18400 km2 excluding greenhouses, CBS). This therefore produces a required output per ha of 34.76 GJ / ha year. That is the top horizontal line in the graph.

For the world as a whole it is slightly more favorable, we are simply one of the most densely populated countries in the world. The global minimum is around 18.25 GJ / ha year.

It is obvious that none of the current systems is actually satisfactory. The search for a sustainable Agricultural system, the Plan B, must therefore concentrate on the rectangle at the top right: bounded by the eroi = 3 line and the NL output minimum. That is the area where we allow nature to do the work , as much as possible … * Smit had already come to that conclusion [1], that farming must be carried out without artificial fertilizer and with labor re-introduced if it is to be sustainable. Which of course does not have to be a food forest, as long as the EROI goes in that direction …

And then logically take into account the local conditions such as soil type, water level, and so on. But for that you have to ask farmers, not me …

PS: I welcome anyone to send  new or better data.

* Incidentally, I wrote about this from a different angle: Bionology: Not only allowing nature to grow food, but also other products, such as chairs. [14]

Everything under the current circumstances. For example, the amount of available water, just like solar energy a free available item. But where the sun is reasonably reliable, the water flow is changing under the influence of climate change. The Netherlands is drying out. So also yields from the past are no guarantee for the future … (which in turn also influences the nutrient situation).

Food and land use. The influence of consumption patterns on the use of

Center for Energy and Environmental Studies (IVEM), University of

[10] Iceland: A Comparative Analysis of the Energy Return on Investment

Recycling to be regarded as new material for its impacts , unless …