Imagine that CO2 problems would spread just as fast as Corona in recent months… That’s how I was thinking this week. Suppose we find out (finally realize) that the consequences will be greater as expected (at least, greater as estimated by most and especially much earlier as estimated) and CO2 emissions must drop drastically immediately, in order to have any chance of survival for most of us. To save food production in areas too fast becoming wetter or dryer, acute threat of fresh water supply, or as for instance here in Holland, to keep it dry behind the dykes. The infrastructure ‘Intensive care’ units cannot scale up fast enough, that is, the dyke builders can not raise dykes quickly enough, so to say. And we have to lock down like hell. But in that case not with regard to a human focused virus, but with regard CO2 emissions, a humankind virus…

What then? Then the 1.5 degree economy is born….

Transitions need a push, like video conferencing got a huge push due to the coronavirus lockdown. Video conferencing had already been possible for a long time, with many advantages, but only in this period got the boost that was needed. So transitions are possible, but it is important that the technology, the solutions or the knowledge is ready and available when circumstances change. If it still needs to be developed, you are actually too late. The major breakthroughs in history were not because techniques or organizational forms, were available, but because of sudden change, a disaster, war, epidemic, which gave room to that already existing technique or concept to breakthrough. Similarly, of course, in the case of a CO2 lockdown. Only then things happen that are already latently present.

We are trying to create transitions today as well, but of course far too slowly, and probably much too late. But above all, are those the sames as those that will breakthrough during a lockdown? Currently the transition unfolds as reinventing everything we already do: everything aimed to maintain our current lifestyle. Electric cars, for example, or smart meters, hyperloops, electric planes, hydrogen processes, gigantic wind turbines. Almost everything is moving from mega fossil energy use to mega renewable energy and therefore material use. Which, however, must also be produced with energy. That is a transition but not a solution, of course. That’s a flight forward.

Of course a flight forward is possible, as has happened in the past as: The Chinese originally built in wood, and shifted to brick building when they ran out of wood, and later they started to build in concrete when the production of ceramic products demanded an immense amount of fertile soil and the agriculture was jeopardized. But on a planet with a maximized amount of raw materials, of which only a small part is concentrated and therefore requires (relatively) little energy, you run into a limit. As we can already observe now, as Asia and South America having problems obtaining useful sand for concrete. [1] Then what?

The real question is: what happens with a serious real lockdown, if it was today? And then: what are the things ready for a breakthrough?

Lets first have a look on what happens. We already had a small preview of this in recent months: since many activities were halted, the CO2 curve has been deflected in the direction of the one and a half degree scenario! So it is not only a meter and a half of social distance, but also a degree and a half of ‘societies distance’, or a 1,5 degree economy. Or both. Only, that is not enough. Because the CO2 has to go to almost 0. What is happening now is that a balance is created at a slightly lower level, which means that global warming continues, albeit a little slower. So it needs to be even more. In principle, the human-caused CO2 emissions should go to 0. But that will hardly be possible at all, and studies show that 1 ton of CO2 per capita per year might be possible. [2] In other words: the “1 ton society”. Let’s assume that as our base case.

Currently its 10. Tonnes. Per person. Per year. That is the Dutch average. In other words, that must be reduced by 90%… Incidentally, it is 5 tons per person in a direct sense, the other 5 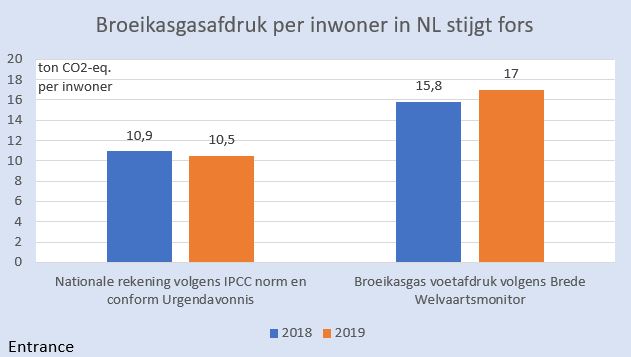 tons are indirect activities, like industry and transport, etc. Which incidentally also ends up with ‘the consumer’: after all, industry revolves around making semi-finished products for the benefit of society. And as a colleague, Martien Visser shows, that’s not all, part of our emissions have been moved to Asia, among others. So the real emissions are even higher.

But let’s stick to those 10 tons. Hence to 1 ton, its already little that remains.

Cut out decoration and recreation, or replace it with do-it-yourself maintenance with waste and trash, and do walks in the park, and you’ve got reduced the first 2.6 tons. Its a bit similar to what many have done in recent weeks… That is the first 25%.

Furthermore, forget about meat, leave the car (and certainly don’t buy a new one, neither an electric one) and go cycling. Also no more flying. We are going to wear out or clothes completely and repair them. Then you arrive at about halfway, 5 tons reduced. Still 4 tons to go…

A question that must first be asked in the event of such a lockdown is: is the government going to regulate or enforce these matters, and controls whether or not to make things available, or will each resident have his own CO2 budget appointed, to spend at his own discretion?

I suppose it will be a mix, after all, the government still has to raise the dikes, only slightly less high, which requires part of that CO2 budget .

We weren’t there yet: as part of the lockdown measures, everyone only gets a limited amount of energy per household. How much, will depend on how far the transition to renewable energy production has already progressed. But most likely it will be a lot less, and you will have to be very ‘economical’ (..) with that budget: use only one light, for example. The refrigerator goes out, everyone who has the opportunity digs a cold cellar again. We start heating only one room … the sliding separation doors make a come back, to limit heated space. Everything will be repaired and the use of labor will increase enormously, as a free source of power, if only by working in our vegetable garden. (Mind that many seeds that you buy nowadays cannot be propagated by yourself, or deliver different results than the original ones. We will have to look for original plants, so that we do not have to purchase new seeds every year, which come with a CO2 burden).

People are also quickly discovering that smaller and more compact living has many CO2 benefits: homes are split, rooms are rented out , and the CO2 load due to new buildings disappears, since new buildings are unnecessary.

We will organize our lives more according to the availability of energy: for example, schools close in winter instead of in summer, then there is no need to heat the schools for two months.

The next question is : What will breakthrough as a result, are there already ready solutions lingering that suddenly prove useful in a 1.5 degree economy? The bicycle, of course, and perhaps the electric bicycle. Something we already see happening during the corona lockdown: cities are closing roads for cars, to make room for cyclists.

But then what more? I’ve been thinking about that, and I didn’t get very far.

The problem is that many so-called solutions that are in development, are technologies that require a lot of energy to produce, data to run and manage , and therefor energy and material to be rolled out. I previously wrote about half a billion charging stations that the world has to build, apart from the networks and batteries and the cars themselves. [3] Or consider retrofitting all houses, hundreds of millions…. If we go into an acute CO2 lockdown, that will no longer happen … Perhaps video conferencing, like now, could be here to stay. If there is at least enough CO2 free energy to keep all those data networks going (which in NL already require more energy than is produced by all our offshore wind turbines) [3]. Perhaps hand tools are making a comeback: hand drills, for example, as the one I recently found cleaning up my parents home.

But I don’t get much further …

That is annoying, because then this story, which started expectantly with a lockdown with regard to CO2, and what might happen as exciting new things, this story goes out like a night-candle. Nothing much happens. In fact, very little happens, only things we already knew… Basically , there will be hardly any spectacular things going on or to be expected in case of a CO2 lockdown.

Perhaps that’s why we are now so busy with a technological rat race to become more ‘sustainable’, as a kind of denial of what we know for a long time, to try to escape the inevitable conclusion: life will become very basic again. Not a new normal, but an old and known normal. We can still make music at festivals, but a local one, and unplugged. We can still go on holiday, but only once a year, in our own country, and you have to save CO2 for it. ( it looks like this year we have to spent our holiday in our own countries as well…)

In my book I came to the conclusion that life might be possible at the level as in the early sixties of last century. And in recent weeks I sometimes felt like that already again: Not much happened …

PS: I am open for suggestions about potential breakthroughs …

or: Is there anything we can develop now that will prove useful later, in a CO2 lockdown period?

[1] among others see the book: People vs Resources, publ. Eburon, and short videos based on the book:

If you can make a profit, its not sustainable. Making profits is what brought us into the problems ...