Last week I published a letter in the Netherlands, in which I indicated that about 800,000 hectares of land would be needed for the construction of new homes. That’s how it works in a transition: We have to significantly reduce the impact of building. And it is becoming increasingly clear that, just as with energy, we need a transition towards renewable sources as well.

The Embodied energy of biobased material is generally much lower as of minerals and metals, (in addition to other benefits such as CO2 storage). But then of course there is land needed for production. Which can be labeled “embodied land”, as I have developed it as an indicator in the MAXergy method [1]. In calculating with embodied land , you can work in two directions: converting the required land back into energy data, after all it is solar energy for a year that produces the yield of 1 hectare: or the other way around converting the processing energy into land ,in addition to the land needed for growing. Land is energy, and energy is land, is the basic drive of the earthly physical system, the driver of everything, on which all mass is formed and used, whether as a plank or table, as a sheep or as a human being.

We are quite emotional about human suffering, or about slaughtering animals, and rightly so, within the species that is a drama, but of course it is all very local emotion , seen as part of a immense universe of solar systems going their own unknown routes. Why then on all those billions of planets there is 1 planet (for the time being) that has a form of evolution, within which again 1 species in particular has been given the property to be able to become emotional, is still a mystery, but as far as known that is not so relevant to the course of things. What I want to emphasize here, is that in any case, emotion is not that relevant to the survival here on this one planet of that one species, it is still physical laws that determine the evolution. And even if the human species would further develop, it would still be condemned to this corner of the universe, energetically it is not possible to spread across the universe. And on the other hand, extinction of a ( our) species) is not so special either, that happens all the time, and sometimes even on a massive scale on this planet. Research shows that we as mankind too will go through a deep trough, no matter what else we do, that is simply inherent to the natural course of events. [2] We however will decide for ourselves whether that will be quick and hard crash, or a more gradual transition. But I am deviating from the topic…

The same species, us, is now trying to survive, and trying to maintain its luxury with limited means. To be able to do that, the species, we , must be aware of , for example, the consequences of the use of materials. As mentioned, we already know from previous analyzes [3] that we must switch to biobased material or at least have to rely on ‘renewable’ material (at the start, and not to be ‘renewed’ afterwards). Which includes the claim to that aforementioned land. That material transition is no different from the energy transition, energy and material are essentially two of the same.

The Netherlands now wants to build 100,000 homes per year. Which is more as really necessary or possible, it is mainly a number driven by the industry lobby, but we will take that as a starting point. In that case, those homes must be built from biobased and / or renewable material. And about 10 years ago, and within the framework of that MAXergy project, I had already calculated that it would require approximately the annual yield of 8 hectares, of flax, hemp, straw, wood, bamboo, etc., to build 1 house of 100 m2. Ergo, 100,000 homes per year require the yield of 800,000 hectares per year. Or about half of our agricultural area in the Netherlands.

And since there is a big debate in our country on how to use our limited amount of land , for sustainable agricuture, solar energy field, new housing , al requiring new land, its important that the discussion includes all claims and needs, and not exclude the material impacts. ( and shift them to other countries)

The letter resulted in a lot of response, including from a few relations who immediately indicated that they would ‘fact check’ my figures! Rightly so, it seemed like a lot and my figures were from many years ago. (my twitter timeline was very budy last week )

And what where there findings ? Ralf van Tongeren and Gijs Kaper arrived at 5 to 10 hectares per house of approximately 115 m2, from terraced house to detached house (ie the yield of those hectares from 1 harvest year). Thank you gentlemen, for the calculating work! That’s great, and shows that I was probably still on the low side, because their results were still without finishings, glass, installations and foundation…!

Foundation was included in my original calculation, but it had been quite a puzzle at the time to come up with a biobased solution for this. Finally found ,by lifting the building and detailing so that we had six continuous wooden columns on which the building would stand. The connection to the soil for the wooden posts would be made of biobased plastic ‘footings’ (we would had to develop them). 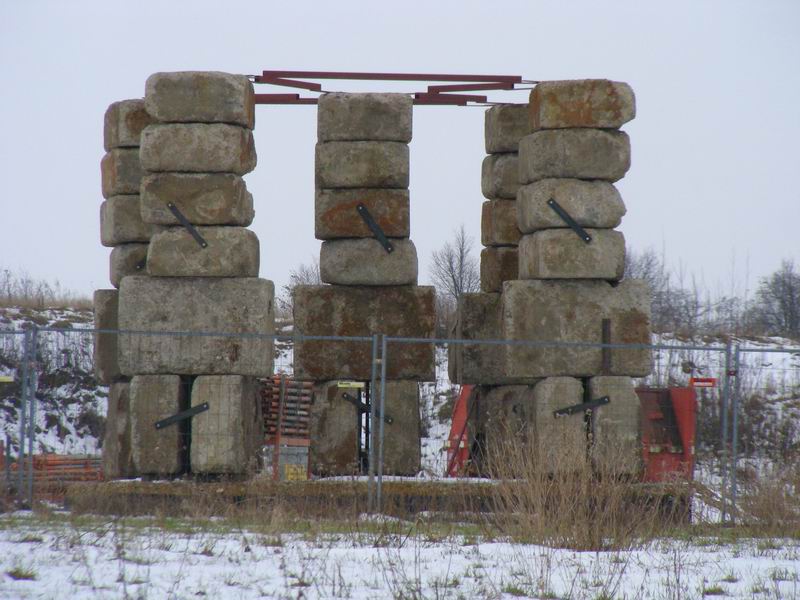 Those feet would then stand on a compression-resistant foundation of a meter thick bed of solid gravel, a mixture of gravel and loam.* The test for this was already carried out at the time, and that solid gravel package did not shrink after 2 years of measurement. (Unfortunately, the house was never built.)

Nevertheless, a concrete foundation will often be seen as the simplest. However, this can also be converted into land use, via (renewable) energy necessary to close the cycle, just as is done with biobased / organic materials.

This includes two effects for which a translation into land use has to be made with regard to a concrete foundation: 1 expressing the embodied energy (production energy) in land use 2, expressing the circular energy in land use: the energy to restore the original raw material stock.[4]

Ad 2: Next the circular energy: lets use an alternative flat-rate calculation for this: shell lime cement: From the Wadden Sea in the north of the Netherlands, around 245 kg / ha-year of shells can be harvested in a sustainable that is continuous, yearly, manner. When fired, this yields in a ratio of 1 to 3 (sand for shell lime cement / concrete) at 2.56 cubic meters, about 7 ha-year worth of shells per house foundation. (its a 1st concept, calculation requires improvement). For 100,000 homes, it adds up to 700,000 ha. to harvest per year. (and those 700,000 ha. can in principle no longer be used for anything else!) (leisure use would still be possible 😉 Unfortunately, the Wadden Sea, the Dutch part, is only 240,000 ha …)

So even via a alternative route, in fact on the basis of ‘renewable’ cement, a foundation type such as concrete is heavily taxing, and therefore virtually impossible. ( if would have to calculate the real routes for cement, like lime excavations , the land required to erstore the fossil lime would be even much higher) . So it is indeed better to look for another method from the beginning. So we still have to look for an alternative to concrete foundations.

Still possible would be a masonry style foundation, and more effective: clay for stone is an erosion material: therefore a renewable flow of material ( within limits). Or indeed, as we had originally designed, a building on ‘legs’. Its a well knon method, many countries have used this in the past, such as in the entire Chinese and Japanese building culture, as well as in Scandinavia for instance.

Then there are the installations. With current practice in new construction, this can even amount to 50% of the embodied energy, for all energy-reducing and producing measures combined [5]. Without going into detail here, this requires low-installation concepts, and possibly, less surface as heated rooms, for example, or even concepts without installations, as I have already shown here. [6]

Now to come back to the beginning: That’s a lot, somewhere between 500000-1000000 hectares, and possibly more depending on choices for foundations, installations and finishing. For 100000 houses a year . I wonder how much that in your country might be… Its important to make that calculations , to void a free ride in energy measures not counting the impact on land that a resource transition will require. ( to avoid in turn a free-ride for non renewed materials , still depleting and impacting our world). See already the discussions around biomass energy.,…!

These figures must be incorporated into the discussion about how to make the Netherlands future-proof, in combination with a transition to circular agriculture and space for sustainable energy supplies. Otherwise it is already a farce from the start, again aimed at the satisfaction of that one species who wants to continue playing his mainly emotion-based games, without any relation to the physical reality beneath.

There’s work to be done, and it’s all about a fair comparison. In Land claims!.

PS: Incidentally, in biobased form the houses also help to limit the CO2 impact through the CO2 stored in the materials. The same colleagues, together with Jan Willem vd Groep, calculated that 40,000 homes are sufficient to store the same amount of CO2 as will now be stored in an old gas field under the North Sea, a CCS project. With a subsidy of no less than 2 billion…. (That, converted for CO2 storage in the houses, would be 50,000 euros per home!)

* The building would as such stand loose on the underground, was however very light and calculations showed an anchor was required to hold it fixed during storms.