Cuba has fascinated me since my youth. Of course, in the sixties and seventies as collective resistance against capitalism and imperialism. On one side I was attracted to the ideas behind the revolutions, on the other side I was a pacifist, refused to join the army, and such things. It should somehow be able to create a better world without violence. The first times a was allowed to vote, I was on the far left, the pacifist socialist party (PSP) , the Political Party Radicals (PPR) which then still existed in the Netherlands. Later they joined all and became ‘Green Left’ .

I didn’t become a revolutionist, but my whole life somehow this kept jerking. As we are organizing our society overhere, in the industrialized world, does not make sense either. Unlimited consumption and growth, its impossible in a limited system. Ho to overcome this? The power to the people? Only, that turned out to have averse effects, like the crazy planning by Mao. Power to a dictator, that can act directly? Which usually ends in power abuse and corruption. Which is why these options went out of sight, as counterweight for consumerism, materialism, capitalism and liberalism. But that the latter could not provide solutions for a more balanced management of the world, both in terms of resources as for money, was also clear. But then what?

Between all global developments I looked into, some 10 years ago I started noticing new developments. In many global graphs and lists Cuba came to stand out . Cuba? Yes, Cuba. One of the first was the Human Development Index, the HDI, by the UN. [1] A country list on the basis of many parameters, with Cuba in the higher ranks, based on included topics like health care, education, life expectation. Cuba between the industrialized countries, with a Very high HDI, above 0,8.  And somebody, I cant find out who at that time, produced a now famous graph, combining the HDI index with the eco footprint by countries. In the graph there was a section seen as ideal, with the HDI above 0,8 and the footprint below 2 global hectares per capita. ( the average share at that time) . And it turned out that there was only 1 country in the world that fitted that box: Cuba. [2] Nobody ever , who did not know this graph, answered the question who was in the box, right, when posed during lectures or presentations . But then, yes, well educated, low impact, but are people happy? Since that is doubted by the whole world. For this topic, happiness, also is a global research and country list: The Happy Planet Index. A combination of life expectation, happy life years and such, divided as well by the eco footprint. And it turns out that in the ranking a few years ago, Cuba stands out in happy life years, and also in the total equation: at that time they were 7th in the world ( with the top ten nearly all from Latin America) [3] 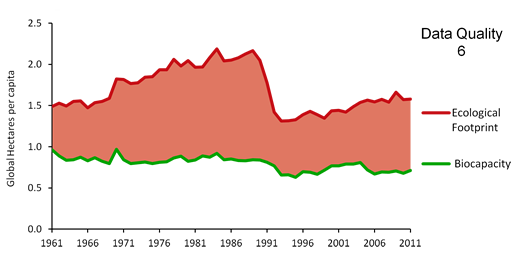 To tell the full story, have a look at the timely development of the eco-footprint of Cuba. It shows that it uses somewhat more as its own bio-capacity, (red line above green line) but a lot less as the global average available, which is a little bit below the 2 gha now. Striking is the dent early nineties. At that time, as a result of the fall of the Berlin wall, Russia withdrew its partnership with Cuba, as with the other satellite states. Combined with the continuing boycott , Cuba fell back, and had major problems, known as “ the Special period” : Cuba exported many resources to Russia, and imported main needs like food. Which stopped from one day to another. The food system collapsed, as many other functions, like transport due to lack of oil, as well as construction. The Cubans made an enormous effort to restructure their country in a few years: agriculture reformed from sugar plantations to local food production, artificial fertilizer was reduced by 90 % and pesticides disappeared completely. Urban farming was introduced, and at some point 30% of all vegetables for Havana were grown within the cities boundaries. Transport was organized communally, A special case was construction of houses. The first thing that collapsed after Russia left, was prefabricated production. It was too costly, from energy perspective. It was Professor Martirena , at the Santa Clara University, who developed a building system, that could be made with local material and local labor, which was introduced country wide, and accompanied with local training. Today again its promoted , as I will describe later. Currently also bamboo is planted on large areas: as a material source, but also due to its capacity to restore soil quality, which was exhausted due to decades of sugar plantations. More information on this period can be found on the website by prof. Martirena. [4]

Of course the special period led to mostly local and sustainable solutions, as becomes apparent for the footprint graph. But by reading about this, I found out that sustainability was already long time part of policies in Cuba. Already back in the sixties , pretty soon after the revolution, the government founded a “institute for the recovery of resources” , notably by the then minster Che Guevara. The system had been developed over the years, and youth was involved via the organization ” Recyclers of the Future” , integrated in the school system.

Cuba  recovered slowly from that period, and was doing quit well starting this century , but had bad luck that within 10 years 5 of the strongest category hurricanes hit the island, which normally should have been 1 in 10 years. And recovery under a boycott goes slowly ( and just weeks ago Cuba was again hit).

The more  I read about Cuba, the more it seems that Cuba is a unique exception: The leadership has not succumbed to temptations of power abuse or large scale corruption. It has indeed developed a Socialist state, (no a communist state, the relations with Russia were pragmatic) . And yes, with a lot of State consigned messages , but without a real state censorship over other information, as is usually applied. Fidel Castro has kept the country free from multinationals, and has resisted for over 50 years the pressure of rest of the world, especially from the USA driven imperialism . The newspaper The Guardian wrote in a obituary last year November: “It was a remarkably peaceful revolution, and supported. Even when his (Fidels Castro’s) regime was under attack, he retained immense popular support“.[6]

Michael Moore, the critical documentary director, was surprised with many aspects of Cuba, when making a documentary: see for instance his interview with the daughter of Che Guevara on life in Cuba. I would experience the same later. [7]

The revolution that led to all this, started however very small, somewhat amateurish, and Castro was soon arrested . Many of his also arrested compatriots were murdered by the army of Batista. ( Che Guevara was not yet involved then) This period is impressively described in Castro’s extensive plea during the court case that followed, and in which he already then unfolds how Cuba should look like after a the revolution. “ finally, a revolutionary government would undertake the integral reform of the educational system, bringing it into line with the just mentioned projects with the idea of educating those generations which will have the privilege of living in a happier land. “

The plans he describes here , much more as in this small fragment of his plea, have all been implemented soon after the revolution was secured. “History shall absolve me”, were his famous last words back then. [8] It seems that indeed that might be the case, and the graphs might show a genuine picture of the country he had in mind. In fact it seems, he succeeded in eliminating the p from profit in Cuba, following the motto: “no individual can enrich himself based on labor delivered by another person” . Therefor its about a balance and equal distribution of resources between people, the focus on ‘people and planet’: R/P. And Cuba could be providing the format for this.

more in a second contribution.

a flow chart showing results over a larger period can be found here: https://www.thenaturalstep.de/challenge/human-development-index/ Cuba has dropped a bit, due to unreliable data on income recently.