While we are part of a energy transition globally, many calculations are made based on costs, in cts/kWh, and wind and solar now seem to become very cheap.

Which is positive, but cost unfortunately do not say anything about he effectivity of those technologies. The financial calculations are pretty misty, due to many impacts not internalized in cost calculations. Besides, in the end this transition is not about money, but about real converted renewable energy, with the lowest CO2 emissions possible .

An important indicator in this transition towards a low-impact renewable energy based transition is the EROI, or the Energy return on investment: How much energy is invested to get another unit of direct useful energy out of it . Which should of course be higher as 1 to start with, otherwise you are losing energy from the start, and the conversion process stops. EROI calculations are difficult, we have developed a quit complex energy supply system. But a lot of research is available, which give good indications. Here I chose to use the data by Hall, who has conducted extensive research at several moments and with different colleagues. [1] And these data show that currently hydro power has the best performance, with a EROI of 100:1. below are fossil fuels, gas and oil with 20:1, and coal with 80: 1. There are a few remarks to make: First of all calculating for these fuels starts at the moment as if they are just available, without addressing the fact there has been a long proces in advance, of cooking and pressurizing biomass in the earth crust. This is left out of the equations , ( I wrote about this in another article [2]) Besides the use of fossil fuels have nasty side effects, we will come back to this. Below the fossil fuels are all the other technologies, with wind as most effective.

For all these technologies ( better: source-conversion routes) the energy for materials processing has been included, but not the energy that should be invested to counter depletion of resources, or the regeneration of resources. In fact you should calculate the (E+M)ROI, energy and material return on investment. Materials also deteriorate , get lost and should be suppleted. Nevertheless, thats for another analyses, here I focus on the EROI data, that already provide a good insight in the positions.

But EROI does not provide the full picture, certainly not in this era, where limiting climate change is top priority. Which is all about reducing Greenhouse gas emissions, and mainly CO2. So its interesting to look at the CO2 data as well, , that is: the CO2 emissions incorporated for the conversion technology per delivered kWh. Something the IPCC has already looked into, and specifically in the annex 2 reports from WG3 [3].

Its not amazing the fossil fuels now score very badly, a factor 10-20 more then any other technology, per delivered kWh. Very low scoring is biomass (which has some other deficiencies) and not totally unexpected: solar mirror plants: one of the most effective when it comes to CO2 emissions.

Now it gets interesting, I have put these two together in a graph, since what we want in the end is a high EROI with a low CO2. To be able to judge this, we have to know where are the bottom lines for EROI and CO2, In that case we can design a cross in the graph and see in which quarter both parameters score well.

For EROI the literature proposes a minimum of 10 , to be really effective, below 10 its not really effective in this overpopulated world , and even investments hardly pay back. [4]

But then , what is a acceptable level line for CO2 ? There is a way to calculate the bottom line, as follows: In the Netherlands we are currently at 10 ton CO2 per capita per year. It is estimated that with 1 ton of CO2 emissions per year per capita would be acceptable to bring the CO2 situation back in balance. [5]. for the total population in NL that would be 17 million tonnes. If that is the maximum to maintain our current energy consumption level, which is 2000 PJ,[6] , a simple calculation shows how much kg can be emitted per kWh: being 0,03 kg/kWh … The bottom line is at 30,0 gr/kWh  ( for NL, but also the rest of the industrialized world) . Would we average over the whole world energy consumption, which currently is 157500 TWh, [7] With 7,5 billion people and 1 ton/cap-year, , the max to emit would be 0,05 kg/kWh, or 50 gr/kWh. Nearly double, but still very low.( and with population growing the trend will again be towards 30)

So we will use the 30 gr bottom line here . There is only 3 (technical) conversion routes within range: Hydropower, ocean energy, windenergy, (I neglect nuclear here) . Solar PV, in its current form, is not in range, for both criteria. 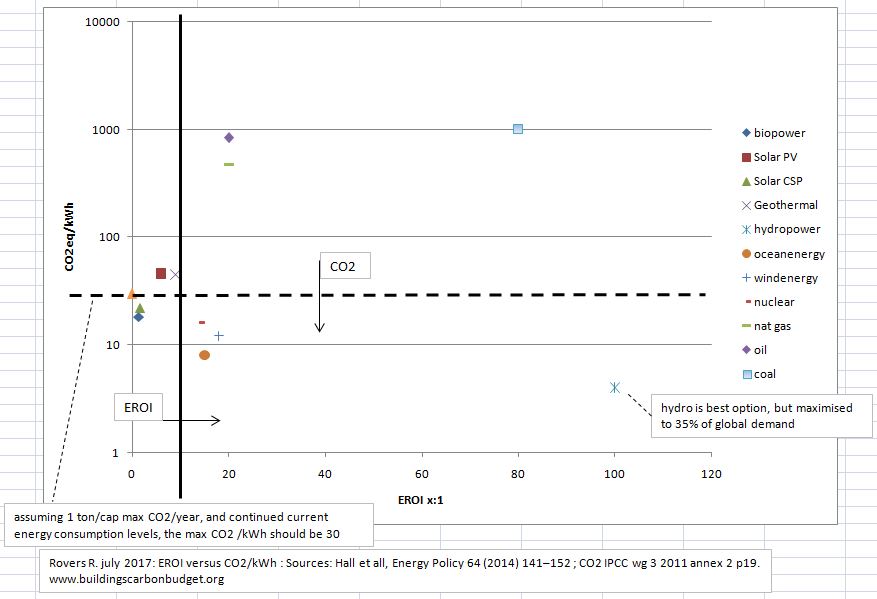 And for the B2 scenario. For the B1,5 scenario, this would be ~45 years. But again, only if installed and generating. For the moment we use coal and gas with 500-1000 gr CO2/kWh, and the budget is fast decreasing. Every year delay, reduces the available RE production years in the B2 scenario with around 10% . In 10 years or so we can’t even afford Wind and PV anymore….

If we could succeed in generating everything with the best available technology, hydropower (4gr/kWh) , it would be ~1200 years (B2). Only it happens that just a few weeks ago a paper was published with extensive research into the potential of hydropower. [8] And this reveals that a maximum of 33% of all current energy demand could be generated by hydropower. The other 2/3 has to come from a combination of other , for the moment higher CO2 impacted technologies.

Of course, these are rough indications. I have seen calculations that show higher CO2 emissions per kWh for several technologies. But indicators are secure enough to see limitations, and as such  somewhat alarming: To have any chance to stay below 2 degrees of climate change, with a reasonable EROI to avoid other impacts ( like too much land use) , the current energy demand will have to be reduced drastically, by means of behavior and use of services, before we count on mega investing in technologies. Which implies less energy consuming appliances, less travel, smaller living areas [5]. As well as to look at Labor-power again, as a ‘free’ energy source reinstalled [9]. But also : to put enormous effort in developing some new technologies, like OPV (organic PV cells), and Airborne wind-turbines* [10]. A promising conversion route, with expected much lower gr. CO2 /kWh . Besides, this evaluation is solely about energy and CO2 emissions. Whether we have the material stocks to install all this, has to be seen, there are many publications that show limits in that as well. [11][12][13] . The challenge remains, to reduce our demand drastically, and find new ways for that.

Not included in the graph, and the data lists , are non conventional or innovative sources and conversion routes. A few data collected from different sources are presented here, as a rough reference.

Tars sands, shale oil and shale gas are all far below an EROI of ten. With tar sands even suspected to get close to 1…! [14]

When it comes to CO2 data are difficult to obtain. Sources found give large differences. I assume that all are at least in the same range as the “easy fossils”. (maybe even higher when peatland is destroyed) .

Airborn wind energy, ( flying turbines, by cable) are estimated at EROI >300 [15]. That could make a difference. Classic windturbines , have a hugh material impact, which is not included in the data and graph used above. Airborne or high altitude devices are significantly less massive (20 tonnes for 3 MW) than traditional turbines of equivalent rating (417 tonnes of steel and 902 tonnes of concrete). This provides a double advantage. Since the CO2 per kWh will be much lower, as well as exergy losses by material depletion.

Solar cells, the panels as we know now, are not in the preferred range . There are a few new promising developments: Thin film, flexible, solar cells, and Organic PV: Solar cells made of biobased components, mimicking nature.

Thin film ( a-Si) has a EROI of close to 15 .[16] The CO2 data are not available to me. OPV: The first impressions from raw research data suggest the EROI for OPV to be double compared to conventional PV. But this could still improve if research could raise the efficiency of these cells types, which are around 1-2 % now. CO2/kWh data should be significantly better, but too early to judge.

There are other options, like energy from algae, but not yet documented ( data welcome!)

[3] Special Report on Renewable Energy Sources and Climate Change Mitigation , Summary for Policymakers , A Report of Working Group III of the IPCC, Reprinted with corrections in 2012

[4] Hall cited in: The true cost of fossil Fuels : As oil becomes more expensive, determining where to invest energy to get energy is increasingly important ,By Mason Inman, April 2013, Scientific American.com p59

the climate does not wait changing . It continues changing. The only way out, is for us to change as well.