There were boxes full of books and reports, even up to 40 years old. And since it was too hot to do anything outside, I finally cleared the attic.

Going through the boxes one by one, its hard to avoid starting reading again. Just throwing away things would be a waste… But its a slow process, and difficult decisions have to be made with every book and report: Keep it yes or no, and if not who can I pleasure with it (..), or which antiquarian bookshop or library would like to have it. … A stressful choice process.

But as a by-catch I came across many reports that already explored sustainability in the last century, or made predictions. And for the collective memory, I will list a few.

One of the most special was from the Wood information institute: ‘energy conscious material choice’, from June 1980 …! And my surprise became even greater when browsing: a complete analysis of the embodied energy of materials ….. Although that was not yet known under that name at that time: The concept that was introduced was “energy requirement” of a product : for production and transport processes.

Magnificent. First the values are calculated per m3 or ton of material, and those values ​​for steel, aluminum, brick and wood are quite similar to what we still use today. Little has changed in 39 years. At the time, I apparently made a lot of notes and calculations in the sideline, I was not aware that I was already so concerned with this matter at the time.

Various products are compared, such as a wooden and a steel staircase: The steel 1- storey high staircase requires 6.8 GJ, a wooden staircase 1.4 GJ. Also with other product comparisons, such as floors or walls, wood comes out as most efficient, not surprisingly. But even today again and again we have to prove that biobased materials are really the better option, unbelievable. Measuring is denying, you almost start thinking.

But that was just one of many reports. I still remembered this one: ‘Future heating of houses and buildings’, no. 33 by the Foundation for the Future of Technology. It was a report that became widely known in the Netherlands. (1982). For 10,000 guilders ( ~ 4500 Euro) the energy consumption for heating could be reduced from around 2000 m3 natural gas (at the time the ‘top’) to 400 m3 per home per year ….! Of course with Heat pumps …, in a combination with a CHP and a parallel-connected wind turbine at district level.

In between the reports is a booklet about the city of the year 2000: ‘La cite de l’an 2000’, by Michel Ragon. From 1968 …. The first part is about history, le Corbusier and so on, but then slowly moves to the futuristic sketches of famous architects: Mostly cities are designed as 1 mega building. Its striking that this image (20 years after 2000) is totally wrong. Except for some single buildings, that come close in terms of exotic style (as a building, not as a city), our urban design is still made up of independent, mostly rectangular towers. Even in China. Architects are poor future predictors, and mostly dreamers. 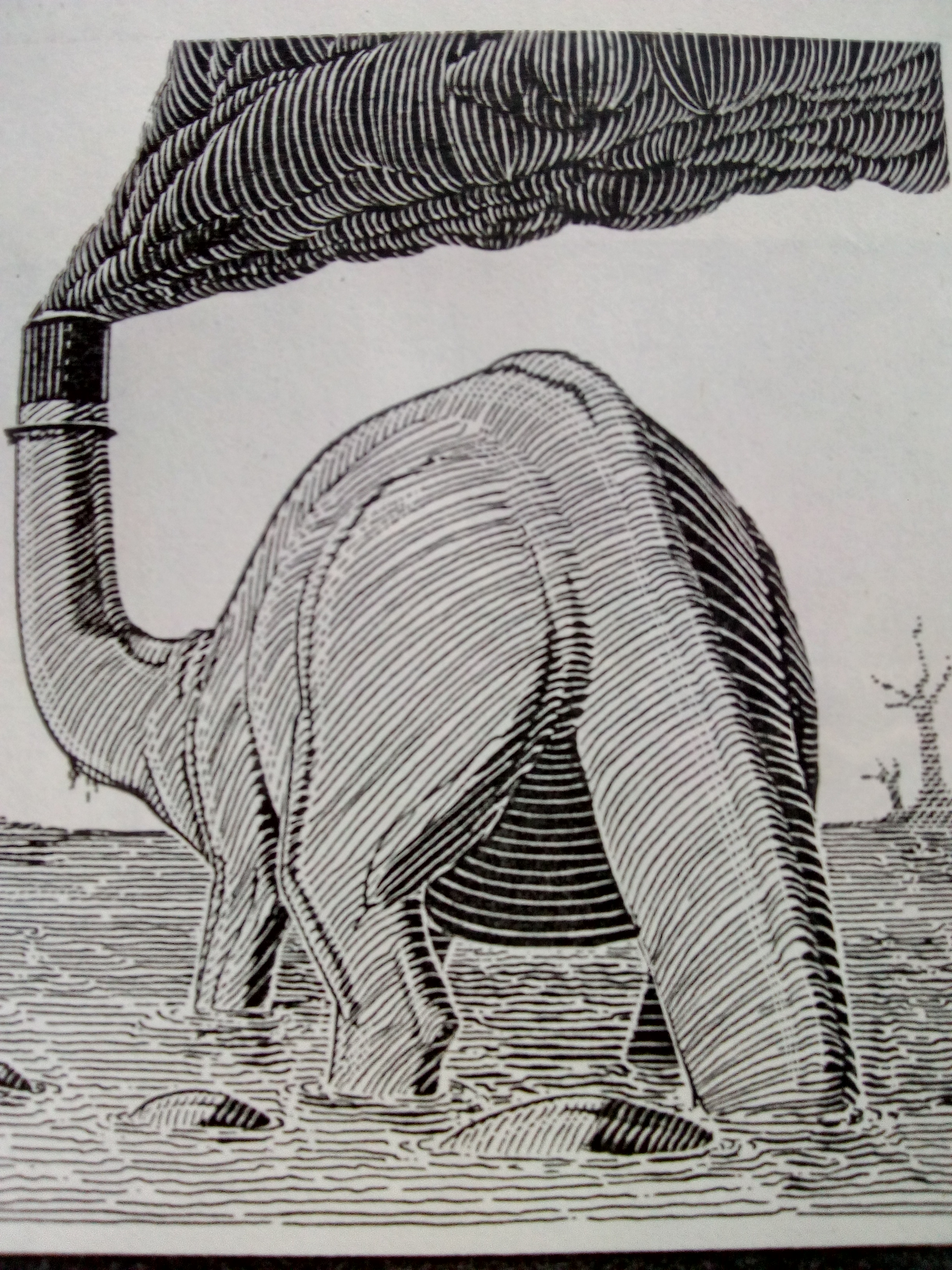 In a paper from 1984, I find a great cartoon, never seen again afterwards: it links the 5th extinction of species (the dinosaurs) to the potentially current 6th extinction wave.

When nearing the year 2000 , going through the boxes, I find many analyzes of the future, looking 20 years or so ahead. Even the government in 1997 presents 4 future scenarios: the Netherlands as a park landscape, as a land of flows, as an urban land or as a Palette. And everyone is invited to vote via an enclosed postcard. Which is still there, apparently I did not respond. Probably because of one of the addressed topics, concerning the Environment and the economy: “It remains a major task to continue to combine economic growth with a reduction in pressure on the environment”. I would have put it the other way around: it remains a difficult task to combine reducing environmental pressure, with economic growth. But hey, even now, 20 years later, they still haven’t found out.

At the 20th anniversary of the Dutch agency for energy and environment (Novem) in 1996, it publishes a brochure, containing an outlook for the next 20 years , by stakeholders in the Dutch energy scene. Of course I have to read that again, Those 20 years have passed now…

A member of the Governmental Energy Council (and a former Shell board member) said: “I have my doubts about the harmfulness of CO2 ….” One feels uneasy reading that, especially now that we know that Shell itself has been researching climate change already 20 years before that… If people in the Energy Council are doubting CO2 effects, its easy to understand that not much significant action has happened since .

He does expect that wind energy, hydropower and solar energy will play an important role around 2020. But, he explains, “the market must do the job. People are not afraid of an energy shortage in 50 years. They must experience the benefits of a different course of action to change their behavior. Government intervention only makes sense for research, it cannot replace the functioning of the market … ”

Perhaps he has a point here, and the conclusion therefore seems: as long as we do not change the market, nothing will change. And that is exactly what is going on ….

Next is Lievense, an engineer that introduced a impressive plan for building a energy storage lake for hydropower in the North Sea. Which had been already on the political agenda twice, and failed. He expects that it would still be necessary to construct in 20 years …. Now 20 years later, nothing is heard about this while it still could be interesting. But we rather experiment with batteries and hydrogen than with a simple and effective plan such as a water storage basin.

Leijendeckers, professor in building services at the TUE, puts his money on CHPs , at neighborhood level. And fossil fuels? “We just use it until they run out. Anyway there will be a new ice age someday,” he summarizes. But he is thrifty by nature and looks for efficient solutions. He sees a future especially in facades: facades that store and release heat as required, or even facades changing colors, depending on the heat requirement. It is indeed explored with for instance nano materials and pcm’s.

By the way, he compares architecture with the horse tram: the first cars were like horse-drawn carriages without a horse. He expects a similar development for housing, which will create entirely new architecture. Thats what I too think , but it takes much more time, with all those stubborn architects still designing roofs like for instance the Romans did.

Another Professor, Andriesse, still thinks there is enough time to develop renewable energy sources: “the fossil reserves give us that time”. He also thinks that nuclear energy cannot be entirely excluded. It is time for the government to make real in-depth investment in these technologies. Perhaps even in ‘Megapower’, a ambitious 7 km high tower in the North Sea that was presented in the nineties (energy generation from temperature differences over the height): According to him, it is possible!

DaeyOuwens, one of the first to teach ‘renewable energy’ at TUE, clearly sees a future for large scale solar cells and hydropower. and more locally wind and geothermal energy. But politics is too open ended in this respect: “The market has to do it. But the market is doing nothing! ” We have heard that before, from a completely different angle (see above).

He loses credit , since at that time he was the project leader for the first biomass plant in the Netherlands. “If it succeeds, there will definitely be more ….!”Indeed, we are now constructing more, unfortunately we know as well that that is not smart…

Van Soest, director of the centre for energy savings back then, is clearly more ahead in thinking: “A policy that is good for economic growth, as well as for the company wallet, and which will also give you an environment that is pico bello, that is simply not possible. The better environment you want, the less you have left for other things. Society is not yet ready for that choice. ”

And she still is not, since the government has become increasingly liberal since then …

Striking: both van Soest and a few pages later Opschoor say that ‘tiny disasters and larger disasters’ are needed to get us on the right track.

Vellinga, earth science professor, and well known environmental expert: “The Netherlands is already starting becoming a laggard in this area ,” he observed at the time. He is even more pessimistic about the loss of biodiversity than about the climate change: “because you do not earn anything from protecting plants and animals … For sustainable energy sources its a matter of time to be cheaper than fossils”. And after 20 years he seems to be right. He also sees a major role for CO2 storage, but “the Ministry of Economic Affairs does not want to think about CO2 storage yet …”

Stevels from Philips is busy with environmentally oriented product development. Lca’s are introduced. For the future, he expects that everything will be recyclable, but to achieve that, all products must have a kind of end-of-life taxing . That has indeed been achieved , in part at least.

Van Gijzel, member of parliament , thinks that the mobility problem will be solved in 20 years. “Consider on-board computers that ensure that everyone can drive 20 cm apart: traffic jams are over, and we can do with fewer roads. Moreover, cars can easily drive 1 in 33 or even 1 in 40 ”. Fewer roads, fewer traffic jams, and 1 in 40? Well, we have more roads, more traffic jams, and have been cheating with fuel efficiency for 20 years …

Regarding railways, he expects a larger role for the TGV, much better than flying. Which is what we still expect and hope for….

Prof. Taeke de Jong, TUD, states that only 2 innovations are needed: a very cost-efficient solar cells and a small-scale heat pump. That is why, according to him, biomass has no future, its ‘pure nonsense’: “Biomass has a yield of around 1%, PV is far above that”.

Finally, the report contains a plea, by Lucien Kroll, for not letting specialists determine everything, but to sit together with local people: this will bring real and supported solutions to come forward. It looks a bit like today wind cooperation’s by locals, which are much more successful than wind farms on land planned by project developers. “The urban planner is not there to eliminate difficulties, but to generate creativity”

Well, not a bad time passing, on a few hot afternoons, too hot to do anything outside.

It puts everything back into perspective. And shows that we are very good at planning, but not so much in execution …. The main conclusion can be: The market has to do it, but it doesn’t, and we have to wait for “tiny and larger disasters”.

By the way, most of the books and reports I will give away or add to the old paper collection. Whats written in it, appears to be either not correct, or that predictions are not happening, or that nothing is done with conclusions. Paper is patient, and then you better recycle it ….

* although I have kept those from the timber institute …